Pros and Cons of React Native Development in 2022 | Business Perspective

When building your mobile application you might wonder why this or that technology is being preferred by the team of software engineers. But the reason in most cases lies in the benefits and values a particular technology can provide to your app.

Check our case study
Snagshout
Online tool for Amazon customers and merchants and has some fantastic features to help you on your way.

When building your mobile application you might wonder why this or that technology is being preferred by the team of software engineers. But the reason in most cases lies in the benefits and values a particular technology can provide to your app.

In the article we are going to share our personal insight of one of the cross-platform frameworks which created a sort of revolution in the world of software development and that is React Native (RN). So let’s have a closer look at this technology and consider its advantages and drawbacks and try to understand if it is worth using the React Native framework for your next digital project.

A word on what is React Native

React Native is a cross-platform framework that allows software engineers to build native-like applications for both Android and iOS platforms using the same codebase. React Native was created in 2015 by Facebook and it managed to become strongly supported by the vast community of followers very fast.

Probably the main reason for that is the use of one of the most popular programming languages which is JavaScript. Yet it is not the only reason. So let’s now turn to the benefits of React Native and make it clear why so many software engineers give preference to this framework.

If you have made a decision to use the React Native framework to build your mobile app you will certainly gain some important mileage that will be positively reflected on all stages of the development process. Here are some of the most outstanding benefits you can get:

Acceleration of the development process

The major advantage of React Native is the use of a single code to build applications for both platforms (iOS and Android). This ability helps to save the development time and budget up to 30% because basically two apps are created immediately for each mobile platform.

It should also be noted that due to the high level of the community commitment the number of platforms that support React Native development is growing. The only extra step which is needed is the installation of additional libraries.

Whereas native app development relies on the involvement of two separate teams for both platforms, with React Native you will need just one team of software engineers that are familiar with the JavaScript programming language. This feature allows you to cut down the price for the development of your mobile application quite significantly and that is a reasonable advantage for most of the business owners.

The availability of only one team also helps to plan its work in the best possible way and to minimize the risks of arising problems that can lead to project downtime. For example, somebody from either of the teams can take a vacation or a sick leave and it might result in a situation, when the application for one platform is about to be ready, whereas the other one still needs some extra effort.

While using the native languages it is practically impossible for software engineers to switch between platforms. But with React Native such situations don’t arise, which means no downtime and better planning.

Since React Native is based on the Javascript language, it has access to a great number of libraries and tools that help to speed up the development process and facilitate the developers’ work. The repository displays about 30 000 libraries that support React Native.

The availability of a wide range of additional libraries is not absolutely translated into their quality, but we should admit that it significantly expands the possibilities of the framework and displays the commitment of the community to improving the framework performance.

React Native is also supported by a great number of external tools that help to perform a lot of routine tasks such as fixing bugs, automated testing, release of an application to the store. The most popular tools that support the development process include Circle Cl, AppCenter, Amplify, Bugsnag, Bitrise, etc.

Integration with the native application and consistency across platforms

It is not a problem for developers to implement the elements written with React Native into a native application. And this is a very valuable feature from the business perspective. With the purpose of lowering costs some views of an application can be written with React Native and then integrated into an already existing native application, and some of the views remain native (those which are not handled by the framework.)

React Native also provides a high level of consistency between iOS and Android versions of mobile applications, React Native makes it possible for the user experience and user interface to be the same on each platform. The operation of the application tends to be identical to the one created natively due to the rendering of the application interfaces to fully native components.

As known React Native is an open-source framework, which means that it has free access and any developer has an opportunity to make their contribution to the improvement of the technology as well as share the knowledge and experience.

This is a really valuable feature especially at times when you are stuck on some stage of development because you are free to seek assistance among the community peers. And be sure: there will always be someone who can help solve your issues. On top of that, keep in mind that React Native was developed by Facebook so this is one more guarantee of wide support.

When choosing React Native for the development of your application you should also remember its weaknesses and consider them along with the key benefits. So let’s have a look at some challenges and drawbacks that can come with the React Native development.

You will still need a native developer

While JavaScript experience can take you far in developing with React Native, you still need the services of native developers to implement certain features of your application. Thus, if you need to implement some unique functionality, the average JavaScript developer will not be able to implement them.

While developers can use libraries to perform many functions, they don't help much if they run into native problems. So keep in mind that on some app development projects you will need the help of native developers.

React Native is a perfect option when you want to create a simple app with attractive design. But when you want to add some complex functionality, it becomes more difficult to achieve great performance. So you have to keep in mind that general performance of the application developed with React Native tends to be a bit slower in comparison with a native one.

This happens due to the necessity of certain communication mechanisms between the native world and Javascript language . But this doesn’t mean that the performance is awful. If your mobile app does not carry out any calculations, then no one will notice the increase in processor load up to 2% instead of 1%. So in most cases the difference in speed will not be really noticeable.

Anyway, you have to be aware of possible performance decreases when designing a dynamic app, filled with complex animations and functions. And perhaps, in some cases you might make a bet either on the functionality or the interface.

One of the most confusing things about testing in React Native is the emergence of two potential groups of errors. One of them arises from the communication with native components and code deficiencies that can lead to errors on both platforms. React Native translates JavaScript components into their native equivalents and provides the ability to freely communicate between them (e.g. a native button notifies the JavaScript code that the user has pressed it so that it can react correctly).

Therefore an application built with React Native should undergo a really thorough testing. Bugs might be contained in the components that are provided by the framework. But the fact that React Native has a vast community and is strongly supported by Facebook can ensure that the framework is actually bug-free.

The second group of errors that do not normally occur in native development but are typical only for cross-platform solutions is related to the common source code. If there is a bug there, you can have no doubt that it will occur on every platform. For that reason, when finding a bug, a QA engineer should check whether it occurs on both platforms. But we should also note that even if the error occurs it will be enough to fix it once. Due to the availability of the shared source code, the bug will be further fixed on each platform.

One of the most challenging things about React Native is the transition from the older version to a newer one. You might wonder: why is there a need for upgrading at all? First of all, upgrading helps to increase the performance and security aspects. You also get the opportunity to access new features and APIs. So, it is strongly recommended to upgrade React Native applications to the latest available release.

However the process can be time-consuming and might take a lot of effort as well, depending on the changelog. But remember: if you miss at least one step it may lead to a situation where you’ll have to spend hours on debugging. And yet things are not so bad if you are just one version behind. 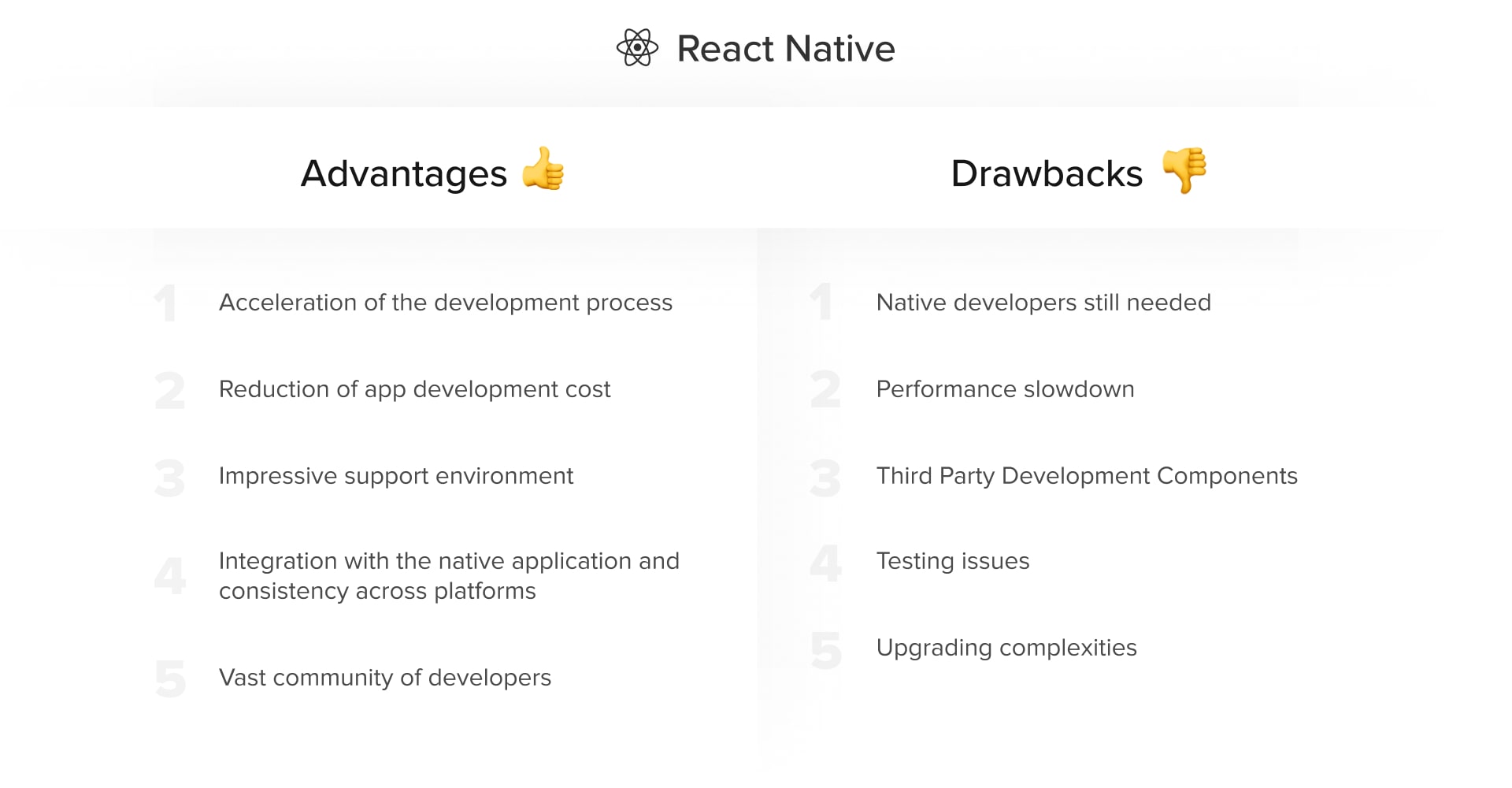 When to choose React Native?

Now let’s consider in what cases you should give React Native a try:

React Native is a mature, 5+ year-old technology, which offers a range of advantages to your digital solutions. The biggest benefit no doubt is the simultaneous production of the code for multiple platforms, which is money-saving and time-efficient. You might say that there are other cross-platform solutions like Flutter or Xamarin, but what makes React Native stand out?

Of course, React Native is not a technology without flaws and weaknesses. One of them is not perfect performance of applications with a great number of animations, which provides for a constant change of views.

Also the fact that RN is mainly developed by Facebook to cover the needs of their team leads to unavailability of some features out of the box. Besides, certain features might have poor support – e.g., tracking the user’s location while the application is running in the background. Therefore, it’s worth researching first whether the application you are going to build will use the tools poorly supported by React Native or some of the 3rd party solutions from the community.

Even if the application uses a module that is not supported by React Native, it is still not the reason to cross this technology out. Due to the possibility of integration with native solutions, you can write a native module for a missing or poorly supported function per each platform, and then integrate it with the JavaScript code.

In most cases, the advantages of React Native outweigh its drawbacks. But the most important thing is that the majority of all flaws can be eliminated by cooperation with an experienced team. Moreover, hiring a team of professionals with a great background in React Native, ReactJs, and JavaScript is the key to creating a successful application made with React Native.

React Native is a tool commonly used for the development of various types of applications by our company. If you have any further questions, feel free to leave us a comment below, jump on a call, or drop us a line.